The Kalamazoo Pipe Band teaches highland drumming, also called Scottish drumming or pipe band drumming, on Tuesday evenings. Students are offered instruction during the first part of the evening, followed by “band practice” in which the students can join in on the tunes they have successfully learned.

Highland drumming is a style of percussion accompaniment that is different from other forms of percussion performance. The most outstanding differences are that the percussion section does not set up a rhythm…… or “lay down a groove” ….. for the other musicians to follow, and the drum corps is the only source of dynamics in the band. The drum scores are written to closely follow the rhythms and the “feel” of the tunes, with a primary goal of enhancing the music by reinforcing the pipers’ playing. More so than other styles of music, the drum scores are “harmony” to the music, and not simply a repetitive beat that goes on while the band plays. While the drums and the pipes together play out the intricacies of the tunes, the drum corps contributes the dynamics, or the “light and shade” to the performance. While the pipes have no ability to adjust the volume level of their instruments, the drum corps provides the illusion of soft and loud passages through exaggerated dynamics in the percussion scores.

These prime differences, along with many other execution differences from other percussion styles add up to what is often considered among the more difficult marching percussion styles to successfully perform. The stick control, hand speed and extremely tight unison playing that is required for highland drumming puts this type of percussion into the category of “advanced performance style.” This is not to say that individuals cannot begin their drumming career with highland drumming, it certainly can be, and has been accomplished. In fact for a serious and dedicated percussion student, this is an excellent venue in which to work. Because of the critical nature of the unison accuracy, the relative difficulty of the drum scores, and the fact that the percussion parts are based upon the generally accepted rudimental standards, a student has an opportunity to attain a level of performance that will be of significant value when the skills developed by highland drumming are applied to other styles of performance.

A pipe band drum corps generally consists of one bass drummer, multiple snare drummers, and tenor drummers.  The single bass drummer, as it is well accepted in any style of marching band, is the key player in the drum corps. In pipe band style, the bass player must have an intimate feel for the tunes and be rock steady in maintaining the tempo. The snare drummers play pipe band snare drums. These instruments are 14’ high tension marching snare drums, with Kevlar top heads, and with two snare strainer assemblies, one under the top head and one under the bottom head.  High pitched, crisp sound, and heavy. The snare drums are played with lightweight sticks for speed and a bright crisp tone. There are two styles of play for tenor drummers, known as rhythm tenors and flourish tenors. The rhythm tenors play designated scores to augment the overall sound of the drum corps. The flourish tenors are the “show” drummers of the corps, well known for their routines of swinging and spinning their drumsticks while the other drummers play. While some bands have tenors of each type, it is common to see tenor drummers who combine the skills, and play some rhythms as well as flourish.

While the Kalamazoo Pipe Band is prepared to provide basic percussion instruction to beginners, as well as a promise to challenge experienced percussionists, it would be in the best interest of the student to have already received lessons in basic music theory. You should be able to read music before you begin drumming instruction. Basic music reading skills are a satisfactory prerequisite, because the scores are “broken down” into small sections for learning purposes, to insure accuracy of interpretation and execution. If you are a potential percussion student whose ultimate goal is playing DCI (drum corps international) or marching band rudimental drumming, or playing a drum set, then this may not be the best starting point for you. You probably would be better off with general percussion instruction.

To the attention of experienced drummers, specifically to those who have aged out of their marching band or DCI organizations, if you are looking for a place to continue to perform and also expand your musical horizons and percussion skills, you should contact us. Likewise, if you are a concert percussionist or set player, who may be interested in expanding your horizons and develop new skills, contact us. If you have never seen nor heard highland drumming, it could be very interesting for you to come and see what we are doing. Scottish heritage may be the draw for you, but many percussionists have become “hooked” on the challenging scores and drum ensemble performances found in highland drumming. There is a lot you can learn here, and opportunities to perform in some interesting shows and competitions.

For those of you who already know something about rudimental playing and marching band drumming, here is a list of differences and style highlights. 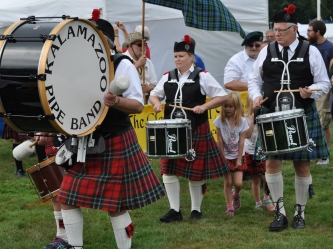